Leo Express buses have ridden around the planet Earth 30 times in half a year. They are the only ones in Europe offering a higher class whose occupancy has doubled

PRAGUE, 25. 9. 2018 - For the first half of 2018, Leo Express buses have traveled the distance of 1,350,000 kilometers, so that they would ride about the planet Earth more than 30 times. The carrier has transported more than 200,000 passengers over the past year. The use of the higher Business Class, which Leo Express offers as the only bus carrier in Europe, has doubled

Leo Express buses have transported more than 200,000 passengers and their occupancy has increased by 22 % and sales by 30 % over the past year. Of the total number of passengers, 14 % use the higher Business Class which Leo Express offers as the only bus carrier in Europe. In 90 % cases passengers choose it for increased overall comfort and especially for a bigger legroom. Wi-Fi or refreshments are included in the price of the ticket. The most transfers between bus and train lines will take place on the routes to Mukachevo, Krakow, Lviv and Zlin. 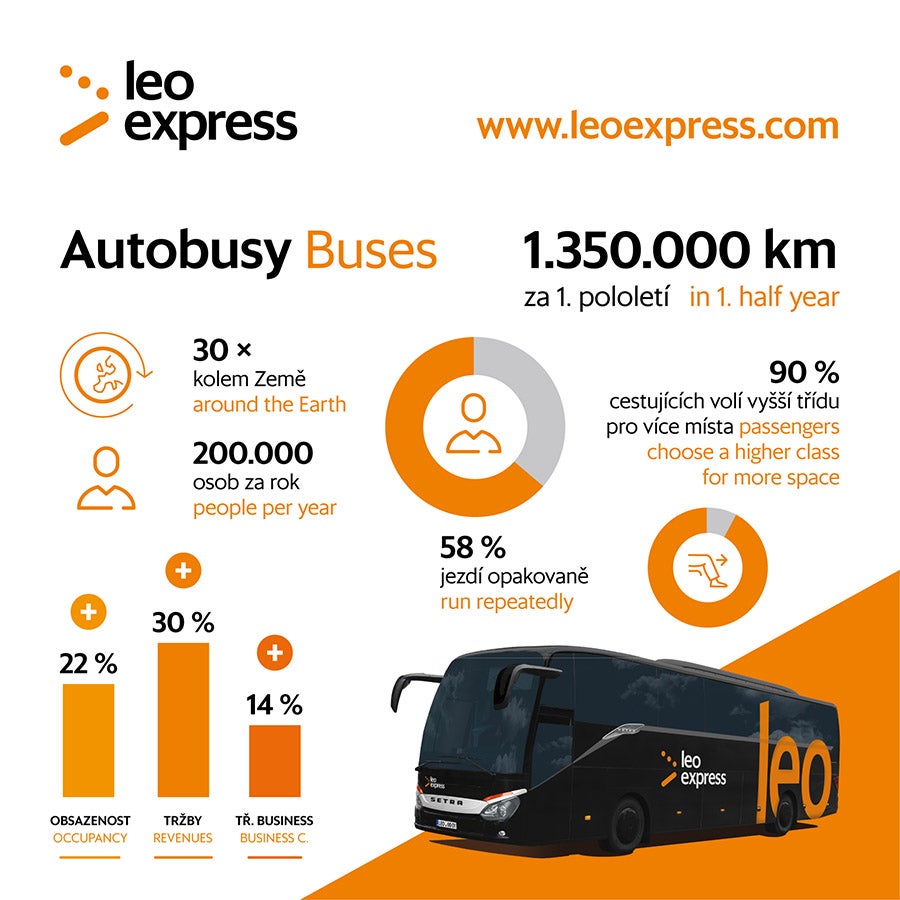 More than half of the passengers (58 %) travel with Leo Express buses repeatedly. Over the past six months, one of the passengers has traveled even more than 15,000 kilometers. In total, Leo Express buses have ridden over 1,350,000 kilometers for the first half of 2018. They would ride around the planet Earth 30 times or would travel to the Moon and back.

„We don’t believe that bus travel is uncomfortable and just for students. For example, our buses to Munich are traditionally busy at this time due to Octoberfest, when people who do not use it otherwise go by bus. They can leave the driver's license at home while enjoying enough legroom. The passengers spend every mile traveled on our connections in comfort, whether it's in the Czech Republic, Slovakia, Austria, Poland, Germany, Hungary or Ukraine," says Peter Köhler, CEO of Leo Express.

Leo Express is a private multimodal transport group, which started its activities in 2012 with new trains on the backbone lines in the Czech Republic. Since 2014 in Slovakia and since 2018 also in Poland. It also operates an extensive network of bus and minibus lines in the Czech Republic, Poland, Germany, Austria and Ukraine. In August 2017, Leo Express took over the German company Locomore and resumed its operation on the Berlin-Stuttgart route together with the company FlixMobility, becoming the second largest commercial passenger carrier on the German rail. Leo Express is the first Czech carrier to operate a rail connection outside the Czech Republic and Slovakia. In July 2018, it started operations on the Prague – Krakow railway route, becoming the first passenger commercial carrier on Polish railways.

It also provides door2door activities such as transport home to selected addresses in the Zlín Region. In 2016, the company announced the purchase of new trains from the world's largest manufacturer CRRC. In 2017, the company founded the peer-to-peer cashing company SmileCar, which has merged with HoppyGo since June 2018 to become a major carsharing provider. The founder of Leo Express is Leoš Novotný, CEO is Pavel Spilka. More about Leo Express at www.leoexpress.com.